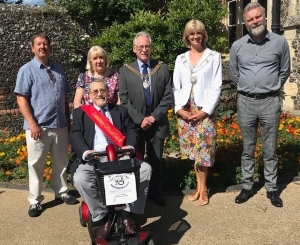 The Lord Mayor of Canterbury, Cllr. Terry Westgate, and the Sheriff of Canterbury, Cllr. Jeanette Stockley together with her escorts and Darren Ellis, the Civic Manager, were treated to a tour of the city by our excellent Guide, Andrea Russo who, undaunted by a recent back problem, used a mobility scooter to do the tour!

The tour started from Tower House and included visits to the Poor Priests Hospital, the site of the Roman Theatre, and of course the Cathedral Precincts and The King’s School.

Andrea recounted much of the city’s history and how Canterbury had become “The Cradle of English Christianity” and is known as “The Mother of England” which is the motto of AVE MATER ANGLIAE on the city’s coat of arms.

Book Launch! Canterbury - A History since 1500