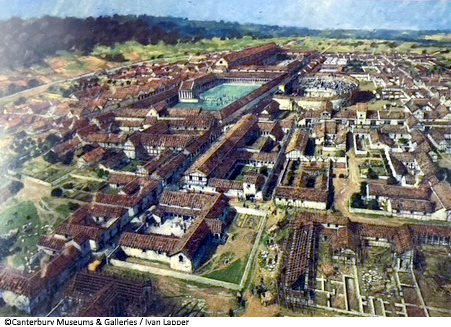 The current, state-of-the-art, Marlowe Theatre can seat 1200 people in the main auditorium. But did you know that in Roman times Canterbury had a theatre that could accommodate 3,000 citizens?

Work by the Canterbury Archaeological Trust (CAT) has revealed the massive footprint of this theatre that straddled Watling/Castle and St Margaret’s Streets at the site of the Three Tuns Pub...

An artist’s impression of this area in Roman times can be found here.

So why does Watling Street run straight through the site of this theatre? The answer is that the Roman Watling Street passed close by on the south side of the theatre. In Saxon times or later, Watling Street veered from its original Roman route to go through the site. This is clearly illustrated in the new Historical Map of Canterbury from Roman times to 1907, which researchers at CAT helped to develop.

Ask your walk leader to point out Roman features of Canterbury when you take a guided walk. Book your walk now

Discover what's on your doorstep

Book Launch! Canterbury - A History since 1500